We’re planning a series now, the aim of which being to give fabulous texture to some of the titles that we have available. The depth of English history that sits behind them makes each one more than just the sum of its legal constituents; each has played a role in making England what it is now.
So what did a lordship signify in medieval times? A lordship came in three parts; land, rights over that land, and the lordship title which represented the ability to collect fealty and taxes. As one would expect, many lordships had existed long before William the Conqueror, but what William did was formalise the whole set up. He purposely assigned the rights and he embedded the legal framework within which they still sit.
At Manorial Counsel, we’ve spent many years researching possible titles. We’ve investigated the legal structure of those we’ve discovered and ascertained the inheritability of each one; even though the land and rights over their land have long disappeared.
All that hard work has brought us to the here and now. We study titles, track the history of their origination, and establish a new legal right so that each can be owned and passed on to future generations.
And with that said, we felt we had to kick this new series off with a fabulous example – the Lordship of Barrow Lane. You can feel the history in the name alone… 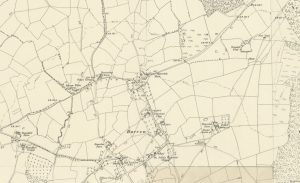 Barrow lordship and manor (later to be called Barrow Lane) is first recorded as being owned by Stavordale Priory in 1298. And there it remained for over two hundred years. However, the Dissolution of the Monasteries in 1533 saw a turn of fate for the title, for Stavordale merged with Taunton Priory. When Taunton then too found itself dissolved in 1539, records show that Barrow Lane passed to William Stourton, 7th Baron.

A title holder of note

William Stourton was no also-ran when it came to being a public figure. Although he’d done a stint as an MP, he was more renowned for his pivotal role in the Pilgrimage of Grace (the Yorkshire uprising). And his abilities as a military commander were then further proven with the outbreak of war with Scotland in 1544. Overall, his connection to the throne was a strong one; he bore the towel at the christening of Prince Edward, who then grew up to be Edward VI.

Some inevitable tooing and froing with inheritance

William’s son, Charles, inherited the lordship in 1548, but not before some wrangling had taken place. William may have been a revered military commander but his diplomatic skills on the domestic front had left him estranged from his wife and their two sons. Initially, his mistress, Agnes Rice – the grand-daughter of the 2nd Duke of Norfolk – had been the beneficiary of William’s estate. However, the will was overturned by the Probate Act and his son, Charles, took on the title of 8th Baron Stourton, and all else that went with it.

Still, who are we to comment on William Stourton’s domestic situation when his son’s later behaviour may have been an indication of the fraught nature of the household? Charles had a temper, a violent one, and he often found himself involved in quarrels. One such dispute culminated in the murder of William Hartgill and his son. Hartgill, who had supported Charles’ mother in her quest to remarry, found himself up against a ruthless man and the quarrel degenerated to the point of kidnap and murder; both Hartgills had their throats cut.
The finger was immediately pointed at Charles and four of his servants. At first, he refused to plead guilty. He probably hadn’t actually been the one to commit the dastardly deed, so perhaps such an admission was beneath him. However, the threat of being pressed by heavy stones (peine forte et dure) until he either confessed or died seemed to do the trick. He was then found guilty and executed.
And at this point, in 1557, the Lordship of Barrow Lane shifts to a new owner; John Dyer, very possibly a tenant on the estate.

The Dyers, The Churcheys, and The Webbs

The Dyers steadied the pace of change for a while, for they remained custodians of the title and its rights until 1615. When Francis Dyer died without an heir, however, the lordship passed to his brother-in-law, Henry. Henry held onto the title until 1637, when he then passed away and left it to Francis Baynton.
Troubled years followed at this point. The English civil war was not to be sniffed at. And just towards the end of those hostilities in 1650, the manor and its rights were passed to James and Richard Churchey… but now they were mortgaged. Barrow Lane passed through one generation of the Churcheys and then switched to Nathaniel Webb when no direct heir was born.
It would seem three generations of Nathaniels (all Webbs) donned the mantle of the Lordship of Barrow Lane, and took the title to 1786. The Industrial Revolution then gathered momentum and Barrow Lane simply got incorporated into the families’ estate of Roundhill, and wasn’t heard of again… until Manorial Counsel uncovered its history. And what a little gem it is.

Rich with stories nestled in the Somerset countryside, how does following on from the Webbs sound to you? Could you be the next Lord & Lady of Barrow Lane? It’s got a certain ring to it… Give us a call.

This website uses cookies to improve your experience while you navigate through the website. Out of these, the cookies that are categorized as necessary are stored on your browser as they are essential for the working of basic functionalities of the website. We also use third-party cookies that help us analyze and understand how you use this website. These cookies will be stored in your browser only with your consent. You also have the option to opt-out of these cookies. But opting out of some of these cookies may affect your browsing experience.
Necessary Always Enabled
Necessary cookies are absolutely essential for the website to function properly. This category only includes cookies that ensures basic functionalities and security features of the website. These cookies do not store any personal information.
Non-necessary
Any cookies that may not be particularly necessary for the website to function and is used specifically to collect user personal data via analytics, ads, other embedded contents are termed as non-necessary cookies. It is mandatory to procure user consent prior to running these cookies on your website.
SAVE & ACCEPT